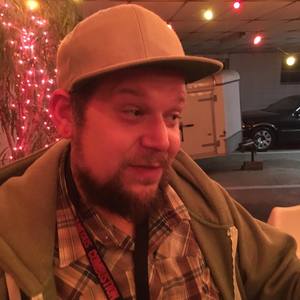 Vinny has been an improv comedian since 2008. Originally from Long Island, Vinny started taking classes at the ComedyWorx Theater shortly after seeing his first improv show. After a couple of years of being a stage performer, his journey continued in 2010 to Chapel Hill where he became a full-time company member and in 2012, Associate Producer at the DSI Comedy Theater. Vinny has been on multiple long form improvisational teams and toured the country performing in NYC, Atlanta, Charleston, Virginia and Washington D.C. Since 2011 he has been teaching improv and focuses on team mates being honest with their emotions, using one’s environment and performing in a way that not only surprises the performer but the audience watching as well.

When not performing he loves to play the drums and watch reruns of Mr. Show, The State and Kids in the Hall. Vinny is dedicated to the art of improvisation and the positive influence it has on those who not only perform to their highest potential but also the audience who walk away from shows wanting to see more or perform just like he did a decade previous.

Testimonials:
“Vinny is an incredibly gifted improviser who has a heart for people and an ear for good comedy–two reasons he also makes for a great improv teacher! He is patient with those just starting out but he makes sure to push those who have more advanced training. Equally important is the fact that he is well-known in the community for his desire that the comedy scene be as multiracial, women-empowering, and LGBTQ-friendly as possible; this is an admirable quality that I believe will one day reap him many wonderful accolades.” – Renata Camara (Current Student)

“It’s easy to overthink improvisation. Vinny was the first teacher I had that encouraged me not to do that– to instead follow the funniest, craziest thing happening on stage and trust that would be enough to go on. Though I had amazing teachers before him, he was the one who unlocked the idea that inspiration for characters and scenes is everywhere, and that YOU can be funny just as you are.” – Lauren Herget (Former Student)

“Vinny is a great improv instructor. He creates a relaxed and enjoyable atmosphere but also is direct and doesn’t tolerate B.S. I’ve taken improv 101 and a Harold class with him and look forward to taking more.” – Sam Cox (Former Student)